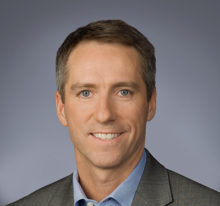 Dr. Christopher Haskell leads Bayer’s U.S. Science Hub, based in the company’s U.S. Innovation Center located at Mission Bay, San Francisco. Haskell and his group support Bayer’s Global Drug Discovery through developing and managing partnerships with US academic research institutions and emerging life science firms, including the master agreement signed with UCSF in 2010. Haskell is also responsible for the development of the CoLaborator, a biotech incubator space adjacent to the company’s U.S. Innovation Center that opened in the fall of 2012 in San Francisco. The CoLaborator houses a number of startup life science firms, and has been developed as a vehicle to foster collaboration between Bayer and these emerging innovators.

After his graduate work at the University of California, Davis and a postdoctoral fellowship at The Gladstone Institute in San Francisco, Haskell joined the Immunology group at Berlex Biosciences. Since joining Bayer in 2007, Haskell has served in various scientific leadership roles, including the Acting Head of Applied Research, the unit responsible for hemostasis research and drug development. In late 2009, Haskell was named head of Bayer’s newly formed Science Hub.