Executive Profile: California Life Sciences Executive Director of Racial and Social Equity Illyasha Peete is opening doors for others in the biotech space 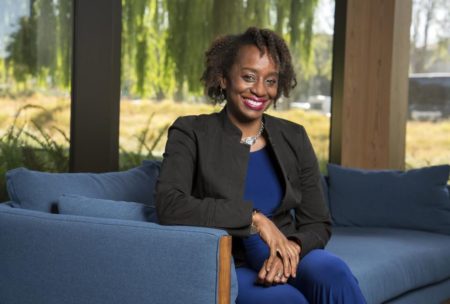 Growing up in Memphis as the daughter of two civil rights activists, Illyasha “Illy” Peete learned early on about judgment calls. She found as a high-schooler playing tennis that there weren’t many people who looked like her on courts in the South, but trained to turn her talent into a national ranking. That led her to be recruited to play college tennis, in addition to receiving scholarship offers for basketball and soccer. After college, she parlayed her business school experience into sales jobs and nonprofit management positions, while also working as a fitness specialist, yoga instructor and basketball referee. She eventually landed at the Center for Excellence in Nonprofits, where she was director of diversity and training/consulting, before being tapped this spring for a new diversity, equity and inclusion job at California Life Sciences, one of the pillar organizations representing the state’s biotech industry. Through it all, she said, the experiences have taught her “to move through closed doors, hold doors open for others and push others like me forward in the best way I could.”

What attracted you to California Life Sciences job? This is my life’s work. My father was instrumental in my development — “He was a champion for those in need” is inscribed on his grave — and if I can uphold a portion of what he did, I will serve in a way he can be proud of. It allows me to serve in a more powerful way, to get more people of color involved in clinical trials so cures are not just for people who don’t look like me. If I can have a part in that, it would make me feel like I made a difference.

Are you working directly with companies? I see the role as internal and external, working with partners, the community and life sciences companies to bring under-heard, unseen voices to the table and have them be part of the decision-making process. It is critical that we as an organization work on ourselves, creating a common understanding and language. With more voices, the work that can be done — the cures that can be accomplished, the changes you can move forward — will be incredible.

How will you judge success? realize we have to show metrics, but there are so many that can’t be tracked in the traditional way. My goal is to provide information that’s critical to continue the support of people entrenched in the system, but also open eyes to tap into other important factors that can’t always be measured in traditional ways.

What’s an example of that? I’ve had people tell me, “I want to be able to walk my child up the hill” — you can track that; another says, “I want to wake up and feel like the woman I was before” — I can’t measure that. You have to find other ways of realizing that we’ve met what we set out to do.

One metric is board representation. BIPOC people at the helm making decisions on boards to make changes that need to happen. We have that metric. But the other side of the coin is being respected, listened to and honored. Are ideas being shut down? Are they coming to the table ready to work together, bend and recalibrate in a way that’s beneficial for all people involved?

Will you be bringing on staff? There is space for it. Right now, it’s just me.

Did growing up in the South influence you? It taught me to read people and work with people who might have been racist. But in the South you learn people come together and experience who each other is, decide what we need, get it done and go on separate pathways.

As a tennis player, I had line judges call my balls out — the court became longer for my opponent. The first time I had a fair line judge, I cried and thanked them. I never expected that level of fairness.

To referee basketball up the ladder, you couldn’t wear braids during basketball season and I had to change my appearance. After my second son was born I came back with braids. Maybe I didn’t get games because of it, but I was willing to be me and suffer the consequences.

How’d you make the leap from Memphis to Michigan to the Bay Area? I started playing tennis when I was 15 and got a national ranking. That led me to Western Michigan, which had a great business school. I came to the Bay Area seven or eight years ago. My mom and I had a house in Memphis, my dad had died and I was divorced and my mom came out to care for my sister’s baby, which led us to move out for family.

Who’s your mentor? My mom. She is wise beyond her years and compassionate, smart, gracious and cares for people in a way that I have not seen many care for others. The other is Larissa Robideaux, who was the executive director at the Center for Excellence in Nonprofits — she taught me about connecting with staff on a more personal level.

What’s your philosophy for working with people? When you bring in others, you need to find out who they are. I have a list of questions that speaks to their communication style and I ask them why they joined, what they hope to achieve and what they would like to spend their time doing. If people spend 70% of their time doing what they love, the other 30% is more bearable.

What’s your most important lesson learned? Take care of yourself, because if your cup is not full, you don’t have anything to pour into others’ cups. And there is space at the table for ideas that are not in line with what I believe. That lesson is more apparent the more I do this work.

In addition to basketball officiating, you’ve been a health and wellness coach. How did you come into that? I was on LinkedIn and Facebook and started a one-minute workout. Fitness has been a big part of my life. Much of what I have accomplished occurred because of my determination and love for sports and fitness.

I worked in a Stanford Health Care-Valley Care program — Living Strong Living Well — working with cancer survivors. To be part of that program that brought people in at their lowest, and be with them when they shifted to being who they were, or even better than they were, was incredibly rewarding. My best friend died of breast cancer, so helping others was a nod to her.

There are so many issues wrapped up in diversity, equity and inclusion — systemically, politically but also on the individual level. How do you handle all those issues? It’s about meeting people where they are and being a bridge of information at a time and place that people can remain open and continue to move forward. People often see DEI work as a checkbox. But it’s not a destination, it’s a consistent journey and companies are just starting now. It’s a problem of hundreds and hundreds and hundreds of years. It’s not just a quick fix that will just go away.

Some people talk about their piece of the pie shrinking, but the overall pie being bigger as we bring more people to the table.